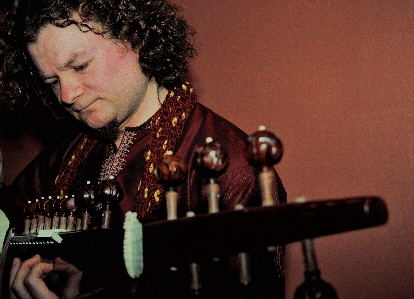 Simon is a performer of North Indian classical music, specialising in the sarod, a large string instrument similar to the sitar, and also practices singing. He took his initial training on the sarod from Ustad Wajahat Khan in London in 1993 for many years of one to one lessons. Wajahat Khan is one of the world’s most renowned sarod maestros. He has been performing since he graduated from the University of Winchester in 1998 with a BA Hons in World Music and English.

At that time Winchester had a thriving World music department where he was lucky enough to study Ethnomusicology with Dr Malcolm Floyd and Dr Frances Silkstone.

Simon is of mixed Indian and English heritage. He is currently in an intense creative period composing music but is open to offers of management as he is no longer promoting or managing himself.